fanheart3 vs Tony Stark. Our interview to his Italian lookalike, Marco Spatola

Still dreaming about meeting Tony Stark? We did! Here is our interview with his Italian lookalike and impersonator Marco Spatola.

Mantova Comics. We are busy bothering fans for our latest project related to ficsIT, when someone walks by. It’s a man dressed in a fancy suit, hands in his pockets, a casual and stylish stroll.

We do a double take, almost giving ourselves a whiplash, and watch him go. For a moment, the only thought crossing our mind is a shocked “But in the program there was nothing about Robert Downey Jr being here!”. Obviously, it lasts less than a second. We soon realize that, no matter how successful the event has been in the past few years, it can’t have been that successful.

So, a very meticulous cosplayer? Photo needed, then. With a very discreet maneuver (here a rare picture of the moment) we run after him, pass him by and turn around to see what he looks like in front. And ok, the doubt comes back. Maybe Mantova actually did it. Maybe they earned millions on their last edition. Could be. Stranger things have happened.

A friend of ours saves us from an embarrassing assault, explaining that the man we are looking at is not Robert Downey Jr but his Italian lookalike and impersonator. What in Italy is called a “sosia”… of Tony Stark/Iron Man. 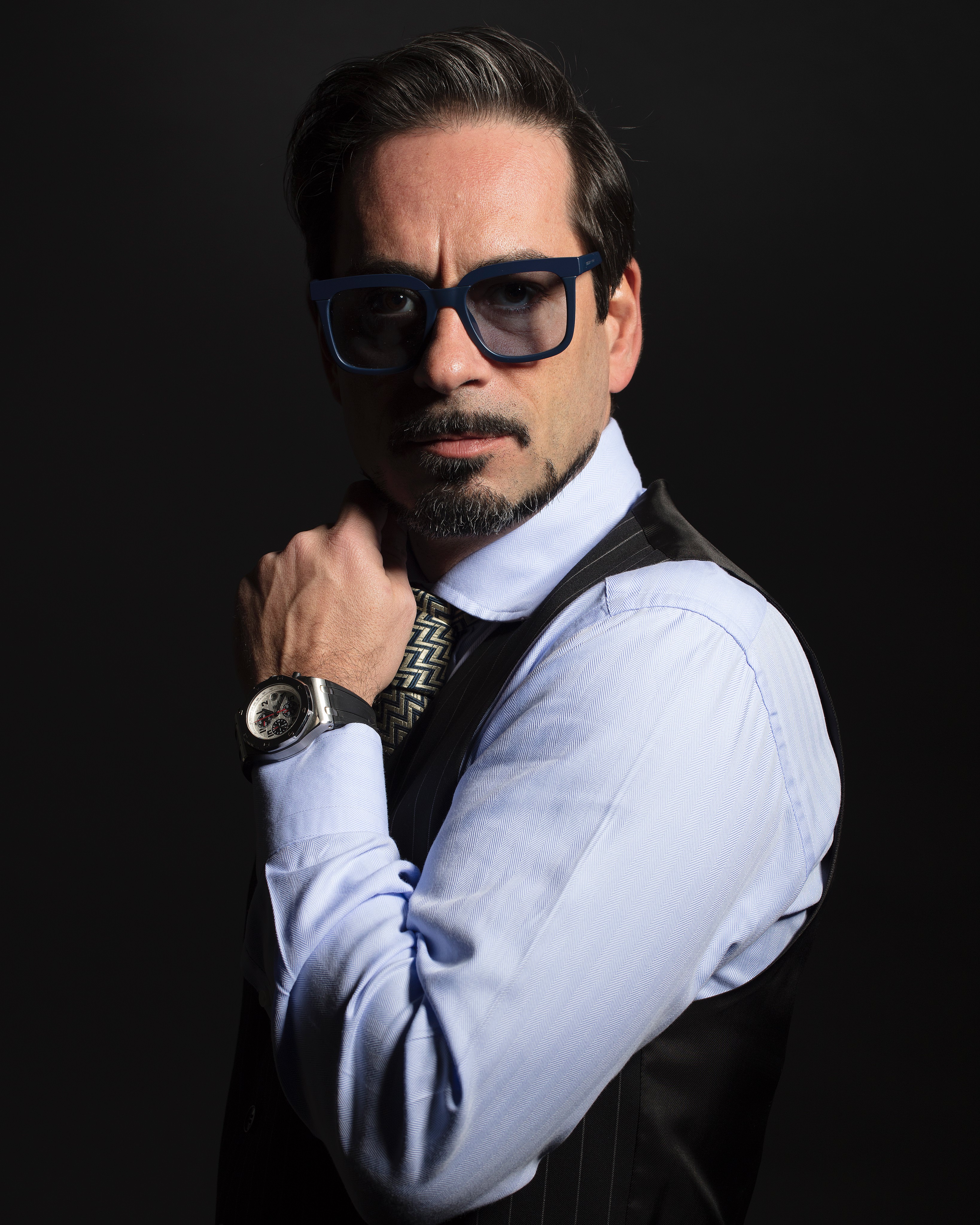 And what a sosia. We observe him critically, looking for flaws, as if we were the jury at the Lucca Comics and Games comparing cosplayers for the best costume award. But it’s immediately clear to us that this Tony Stark wins it all. He does not only look like him; he also moves like him and has the same facial expressions… and when fans stop him to take pictures he reacts like our Tony does with journalists or with those soldier at the beginning of the first Iron Man. And yes, if you are wondering, there is also an armour (created by this artist here, whom we will talk about in the upcoming weeks).

Marco Spatola is not only a great impersonator and lookalike of our favourite superhero (sorry, Steve, you tried). He is also a nice and friendly man who could not resist our puppy eyes and gifted us with a short video (those of you who will attend ficsIT will be lucky enough to watch it).

But was a video enough? Tony Stark happens once in a lifetime, so we could not lose our best chance to ask for something more. An interview, specifically. Today we share with you Marco’s answers and his story about where he started, where he is going and above all about his love for people and for us fans.

Marco, tell us… How and when did you start your “career” as Tony Stark? Was it an idea of yours or did someone convince you to try it?

I’ve been asked to impersonate Tony for years, since friends of mine, cosplayers, thought I looked a lot like him. Then I went with my kids to a convention in Modena (Modena Nerd): I noticed that, after wearing a pair of glasses and taking a couple of photos, many people showed interest in me. So I tried, thanks to my kids, to join the competition at Gonzaga Comics during December 2017… and there it started. My dream in the world of cosplaying.

Were you a Marvel fan before starting to impersonate this character? What do you like about Tony Stark?

I have never been a fan of Marvel, specifically, but I’ve always liked that kind of movies, especially the first Iron Man. What I like about Tony Stark? …Everything! We have similar personalities and let’s just say I’m like him more on the inside than on the outside (a/n: and that’s saying something, considering how much, on the outside, they look the same!)

What are the main difficulties you found while getting into the role?

The only difficulty I found is… fancy shoes! After walking around a convention for hours, they do get a bit uncomfortable. As for the rest, I am like that… so no pain, really, and no effort. People who knew who Tony Stark was made me found out attitudes in myself similar to his, even before I got to know his character better. 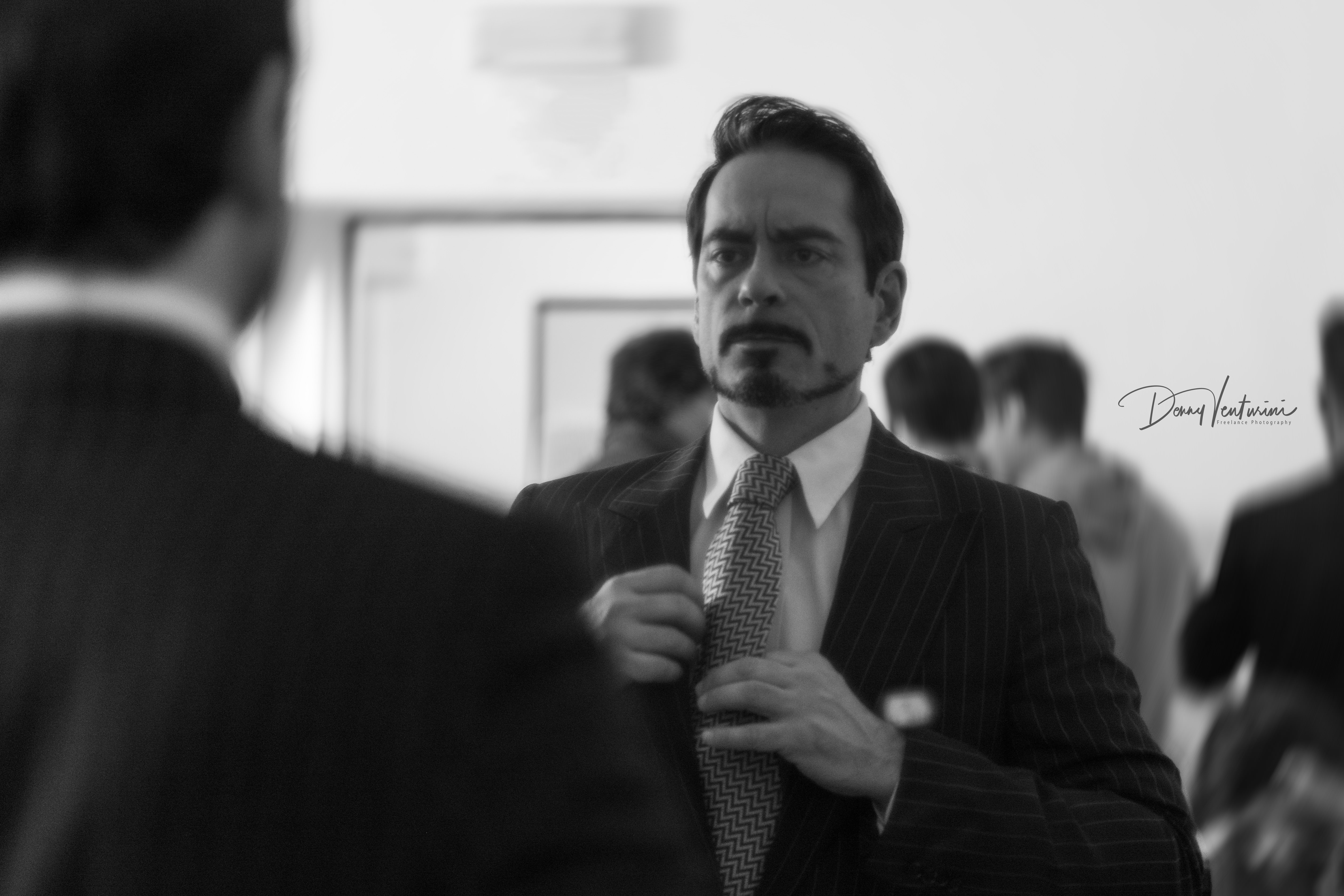 Your socials are very popular and even at Mantova it was nice to see how people – kids especially – related to you. So I’m wondering: what’s your relationship with fans? What do you think about their enthusiasm towards the character you are playing? And are there funny anecdotes you would like to share with us?

I know for sure that fans are not my fans, but fans of Tony Stark. This is a huge responsibility that I’m more than happy to accept. Honestly, I think the enthusiasm for Tony is quite justified: he’s the most human Marvel character, and the most brilliant, too. You love him or you hate him.

Source (a/n: who is writing strongly supports Team Stark because of reasons)

I could tell you hundreds of anecdotes, but there is one I remember very clearly. It’s my first day as Tony at Gonzaga Comics. The moment I arrive at the convention, a girl stops me and asks me to follow her. So I do, leaving my kids at the videogames section. I’m not worried: from previous experiences at events of this kind, I know that a friend of mine could simply have seen me arrive and wanted to greet me.

So we reach an office where there are three or four people relaxing; one of them calls me. “Tony, let’s make a video!” … “Let’s take a photo so I can share it on Instagram.” – “OK, let’s do it”. I look at him and say: “Why don’t you put your cosplay costume on, then?”. A moment of silence and then everyone starts laughing. He tells me that he is not a cosplayer, but a singer. I ask one of the other guys if he is any good, as a joke, and then congratulate him and ask what kind of music he does. His reply: “I sing songs for cartoons”. “No!”, I say, “That’s Cristina D’Avena*” (the only certainty I had in that moment). “NO… I sing them too! See? This is my CD, take it and listen to it”.

I guess my first meeting with Giorgio Vanni is probably the funniest anecdote of my cosplay debut!

Talking about fans, after meeting them did you find out anything about your character that you did not know?

Many, many things. I always listen to them closely, because there is a lot to learn from them. I noticed that each fan knows specific scenes by heart and can mix details from movies and comics in admirable ways. I cannot but take from there to try and become better and better in this role.

How did people you knew before “becoming” Tony Stark react to this decision? Is it something you talk about freely (at work, for example), or would you rather keep this part of your life separated from the others?

At work I walk around wearing a Spiderman mask to confuse people… but lately it has not worked properly! I can’t hide my face and all the people I know are online. My professionalism at my job (special technologies), though, goes behind the image I wear. People in my city probably thought I had gone crazy when I started posting pictures of myself as Tony Stark or Iron Man, but I don’t think they really get what is happening to me as a Robert Downey Jr lookalike. Not yet, at least. And yes, I received insults, but I’m not the kind of man who listens to them. I will keep going as long as I can, as long as I enjoy it and as long as someone appreciates what I’m doing. 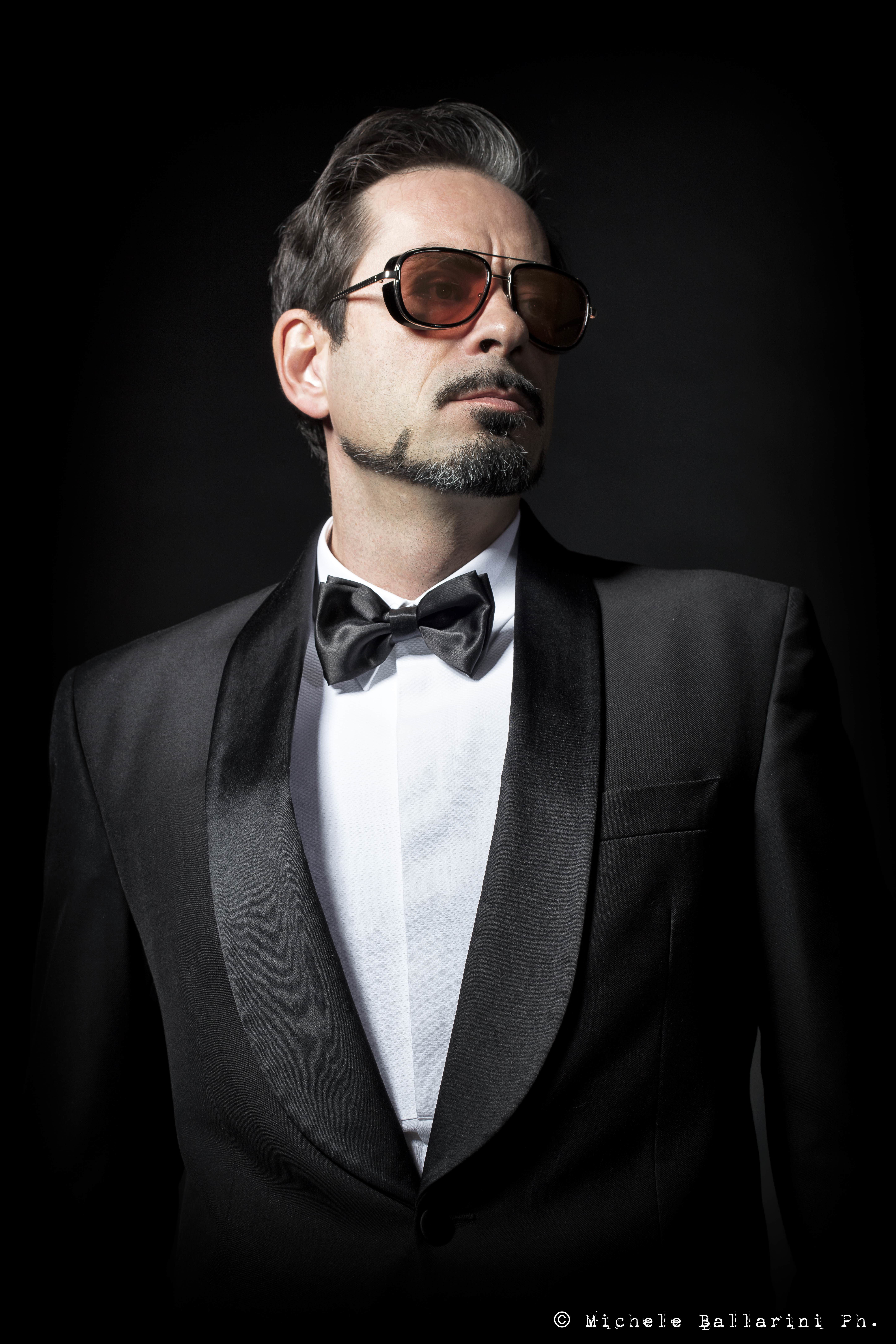 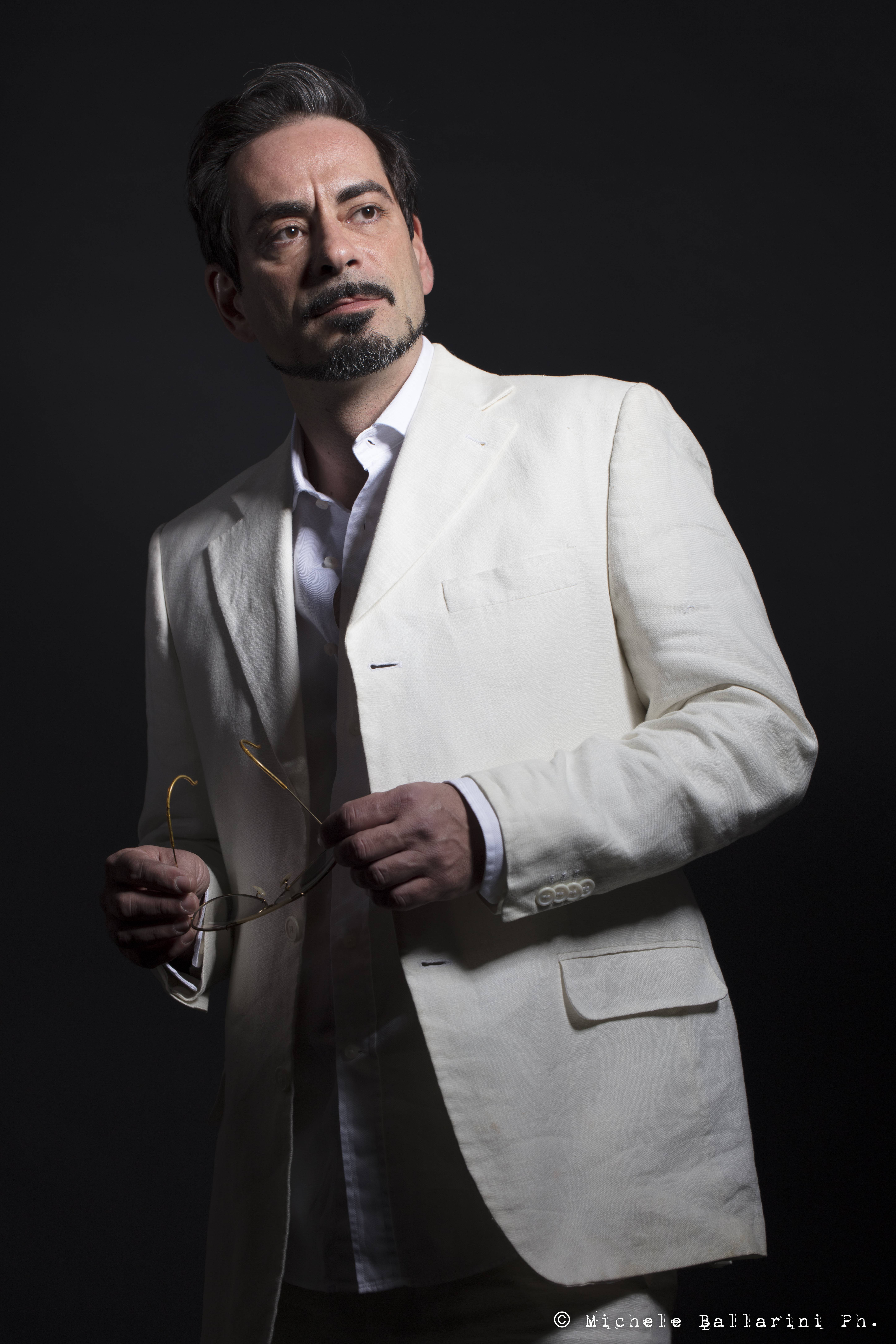 Do you consider yourself a fan of something? What does it mean to you to be a fan?

Maybe my answer goes a bit beyond what you were expecting, but I consider myself a fan of other human beings. I love to meet them and learn something from them. I believe there is a hidden world behind every single person and discovering it helps you live, forget prejudices and ignorance. In my life I was lucky enough to spend a lot of time among other people, and to appreciate even the most introverted and wary. I met so many different people and took something from each one of them. And in this way I learnt to face difficulties and to seize every opportunity.

Any program for the future? Will you join any other convention or event in 2018?

During 2018 I would like to go to as many fan conventions as possible, since they are all a novelty to me. I would like to visit comic cons in Turin, Rome, Naples, Bari, Catania, Palermo and in cities nearer to where I live. Then me ad my agency, ImaCrew, want to go abroad… London, Paris, maybe overseas!

…And this last one, to fanheart3, looks like a very concrete possibility. Physical similarities between Marco and Robert Downey Jr are many, as said before. But it’s the fans’ reaction to him that really makes the difference. There are some amazing cosplayers out there, but to us Marco Spatola, as a lookalike and impersonator, is something more: he’s captivating and definitely charming to all those he meets. In this, he is both himself – a man who clearly likes other people – and a national version of the icon that is Tony Stark. This “ambivalence” is almost confusing, but in a good way, since when you’re talking to him a part of your brain constantly needs to remind the other that you are not actually talking with Tony himself.

We wanted to close our interview with a deep and relevant question, but the “shipper” that lives inside us took the wheel and asked the question that we really wanted to an answer to.

Something that’s relevant to many fans: how would you describe the relationship between Tony Stark and Steve Rogers? Is it true love?

Over and out. As I used to do in school, I would like to skip this question… after all I should have already got a passing mark with my other eight answers. Ahahah! …of course it’s love!!! (a/n: headcanon confirmed!!!)

Avengers: Infinity War will be in cinemas soon… what’s the thing you would like the most to happen?

Sorry to say that we are almost sure that what Marco meant as a joke will actually come to happen. We have not read spoilers or anything, mind you, but we were raised with Shakespeare, Victor Hugo, Moffat… so the 100% happy ending is not a believable concept to us. At least let’s hope that whoever dies will do it saving Tony Stark while Tony Stark saves the world. Anything else would not be worth of the Marvel we have come to know.

You can find Marco Spatola’s official facebook page at this link.

We would like to thank Marco and his agency ImaCrew for sharing all this with fanheart3 and for the passion they are putting into this project…. and into fans. It’s nice to know that when Marco will finally meet Robert Downey Jr (and it will happen, mark my words), a part of us, Italian fans, will be there with him.

*Cristina D’Avena: famous Italian singer who’s known by everyone for being the queen of songs for cartoons