6:15 pm. I leave the flat in a hurry, looking back at what used to be a bed and now looks more like an unidentified shape made of clothes, make-up, cereal bars, used Vaporetto tickets and random items picked up during the day – imagining having to make room for myself when I’ll come back, whenever that will be.
I pick up the pace as the fine print on my ticket reminds me that I only have 15 minutes left to 1) make it to the only bar where I will be able to buy something – anything – to eat; 2) chew on my sandwich as quickly as I can, while also keeping an eye on both my watch and the queue by the Red Carpet; 3) finish putting my make-up on; 4) finally enter the Palazzo del Cinema, present my ticket and walk down the Red Carpet. 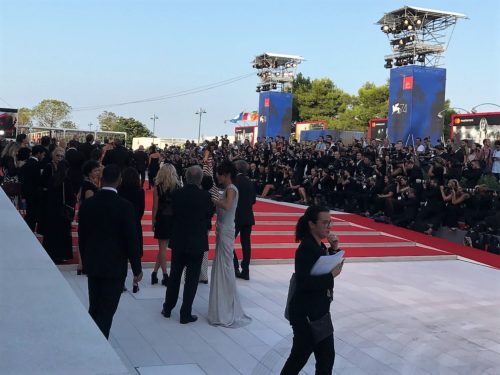 Which, on the Opening Night of the Venice Film Festival, is all about multitasking. Because it’s not that glamorous to be shouted at by photographers if you happen to be standing in the way of them getting a shot of that one celebrity you’ve never heard of and you weren’t even aware was standing next to you. And so you start running and apologizing, you congratulate yourself for not falling over on the steps and, just when you think you’re finally starting to get a handle on this, the main guests arrive, the crowd starts cheering and you freeze.

Red Carpet incidents aside, the Venice International Film Festival really is an incredible experience. It’s that magical place where time stops for a week, and cinema lovers from all over the world and with the most fascinating stories to tell all gather on this little Island near Venice. And it doesn’t matter if you have to spend a whole hour trying to understand how and where to get on the boat to finally reach the island, or queue up for ages by the ticket counter, hoping you will be able to book the last available seat for the night’s screening. You end up wearing flip flops in the morning and boots at night because a storm has hit the Lido, and it’s been raining for hours but you’re still walking outside, because you don’t want to miss a minute of it. And by “it” I mean the reason why everybody keeps coming back to the Festival, year after year. That special atmosphere that you can almost breathe, so much so that it doesn’t matter if you’re there for the movies or the stars, whether you’re a photographer, a critic or – of course! – a fan. You’re there because you want to be a part of it, and breathe it all in. 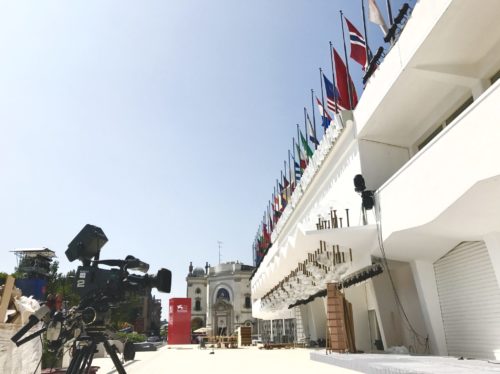 On 30 August, I was lucky enough to attend the Opening Ceremony, which anticipated the Premiere of Downsizing by Alexander Payne, starring Matt Damon, Kristen Wiig, Christoph Waltz and Hong Chau. The film had a mixed reception by press and fans alike, here at the Festival. I found it to be one of those movies that will either really speak to you or not tell you anything at all. I also absolutely loved it. It was, to me, the perfect way to open the Festival.
Downsizing imagines a future in which being shrinked to a few cm of height is being advertised as the solution to the world crisis caused by overpopulation. But that doesn’t even begin to sum up the issues that Alexander Payne delicately and ironically raises: Downsizing sends a message that is much more profound and grim, and is perhaps more about the reasons why the characters make certain choices rather than the choices themselves. 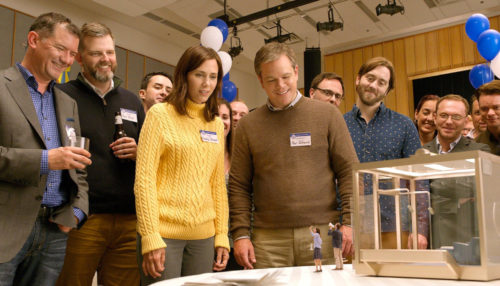 The screening of Downsizing was the main event of the night, but what I want to share with you today is my own personal “highlight” of those exciting, crazy three hours I spent at the Premiere. There are certain moments that can’t be avoided during an event such as the Opening Night of the Venice Film Festival, such as the wait for everyone to enter the room and find their seats, the wait for all the members of the jury to be introduced and all make their speeches, the wait for the film to start while we’re shown snippets of all the future Premieres of the Festival… To sum it up, a whole lot of waiting! 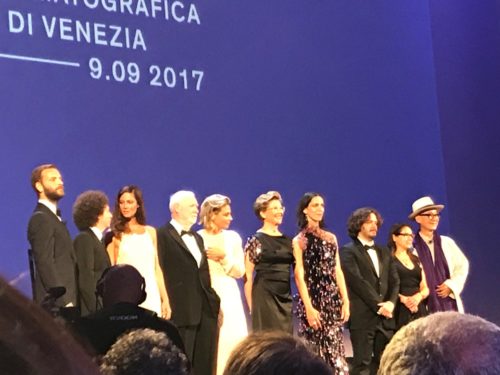 But at this year’s ceremony, together with the usual introductions where all the sponsors had to be mentioned and thanked, there was one speech that stood out from all the others, because it really did come from the heart. Ms Annette Bening, Head of this year’s Jury, owned the stage as she said exactly the right amount of words and, in a matter of minutes, moved the audience and absolutely rocked it. Her genuine and inspiring speech deserves to be shared in its entirety, so this is how I am going to conclude this article, by letting her “love song to cinema” speak for itself. I believe that, even through the cold screen of a phone or a computer, her words will reach you too. 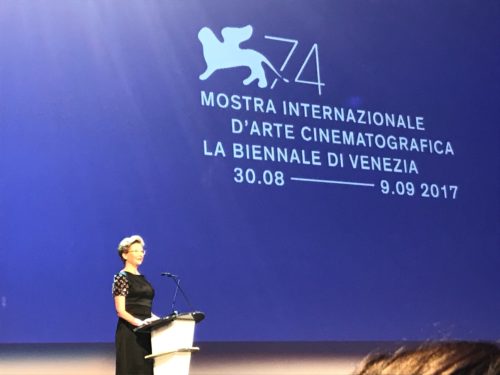 “For me, cinema is magic, and I think all of us who make films are primarily audience members. We make films because we love to watch them.
And, to me, the moment when the lights come down in the theatre and there’s a moment of silence and darkness… that is the moment of possibility. When all of us – it doesn’t matter of you are the President or the usher, or whether you are Italian or American or Iranian or Chinese or a man or a woman – we can lose ourselves in the best way possible and become free. And become like children again: open, curious and available to the possibility of the moment.
This is what we aspire to. Along with my fellow Jury members, we bring all of our passions and enthusiasm and hopefully some knowledge, but most importantly our deep love of cinema, to every film that we see. I am deeply honoured to be president of the Jury.” 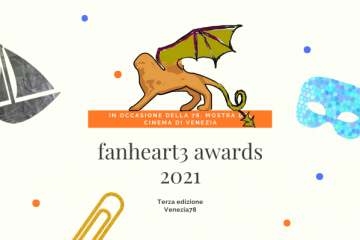